skip to main | skip to sidebar

I didn't get around to writing this in October, but it's stayed on my mind, and better late than never I guess.  It was before the City Council approved the deal on the Gulch -- a deal that disappointed me for its massive scale, its public subsidies, and its privatization of public space.  ThreadATL and some other groups and individuals who cared about downtown organized a tour of the Gulch on October 13.  We met in south downtown and as we walked, we learned about the history of the area and the railway stations that were no longer there. 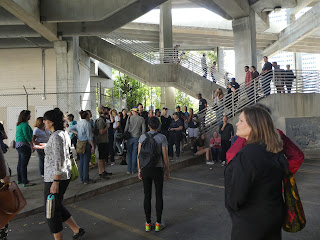 We walked down the stairs from street level into the parking lots and underused space that makes up the Gulch, across train tracks that trains still run on, in dizzying proximity to the new stadium. 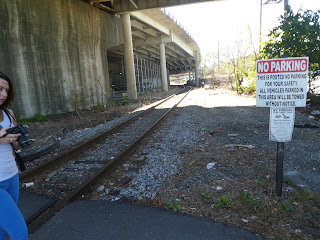 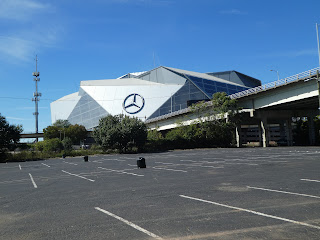 In one particularly underused area, there were remnants of train platforms left over from when Union Station stood there, and three dancers from Lauri Stallings' dance company glo were there, bringing color and drama and to what otherwise would have been a nondescript space. 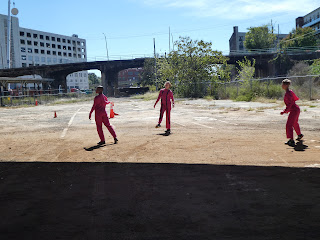 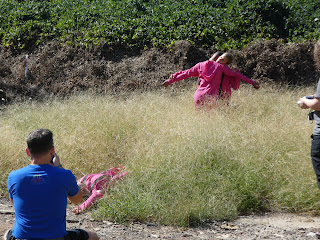 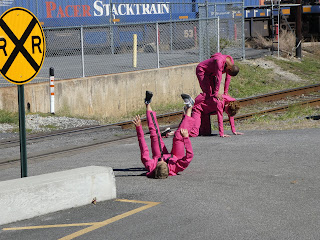 How did an area that played such an important role in Atlanta's history end up being an empty spot in the heart of the city?  The city was built around the rail lines, and as the city grew, it was built over them, except for this one area. The City Council signed off on the mayor's proposal to subsidize a massive project by a developer; it will probably be soulless towers and privatized streets, swept free of homeless people, and there will be nothing interesting about it.  Maybe I'm wrong.  Maybe it won't be awful.

That evening we rode our bikes to Krog Street Market and got dinner there.  It was Pride weekend, and Piedmont Park was full of people with picnics and tents and chairs. We expected there to be crowds in the park, but there also were an enormous number of people on the Eastside Trail that night.  Some of them were probably going to or coming from Piedmont Park, but there was some other event going on in the Historic Old Fourth Ward Park; there were people, everywhere, walking with friends, riding bikes, out for evening, headed to a brewery or a restaurant or a bar or a friend's place.  All I could think of, that night, was how much Atlantans want the city to be better.  Build something better, and we'll come.
Posted by Melinda at 6:11 PM